Thursday 6 January - Down in the doldrums

Oh dear.
Why does everything have to be so difficult and painful?  Why does it no longer seem possible to just ask for something to be done and it be done with care and efficiency?  Just like that.  Or is it just me?
Four hours I spent with O2.  Four hours!   My phone would not unlock.  Just give me another phone I suggested after 2 hours.  Not an unreasonable request I felt.  After all, I had done nothing wrong, my contract was with O2 to provide me with a phone and they had well and truly screwed up.  Can't do that said they, if they can't fix it then it will have to be sent off for repair.  Then fine, give me another one whilst it's sent away.  Can't do that said they.  Then let me speak to someone who can.  Can't do that said they.  And so we went on, round and round and round.  For four hours.
In the meantime I left them to it whilst I nipped out to the bank to make the chaps payment of the final instalment for the house.  Shall only be 5 minutes I said.
Ha ha ha ha ha ha.  Getting all nervous hysteria now.  It took 45 minutes for the bank to make the payment whilst I had to wait there.  A payment that was all set up yesterday.  But even though that was the case, and I had all relevant ID, they still had to phone their security team for an authorisation code.  It took forever for them to through.  40 minutes to be exact.  And I had to be there.  WHY?????  It just doesn't make sense.  And everyone warns me about Italian bureaucracy!  Nothing compared to what's happening in this country.
Back to O2.
Two further hours and techie geek finally declares defeat, draws a blank and tells me my only option is to go to the Apple store in Brighton who will replace the phone if they can't fix it. 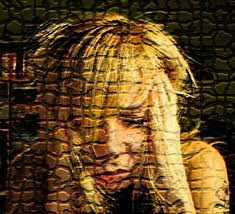 ARGHHHHHH!  I could have cried.  Why didn't he tell me that in the first place???  FOUR hours ago.
And so said the techie geek in the Apple Store.  In Brighton.  25 miles away.
Ho hum.  Two hours later we were on our way back from Brighton me with a brand new iPhone and a thumping headache.
We stopped off at Andy's on the way back (where we have our surplus furniture and bits and bobs in storage) and piled up the beastie with as much as we could pack in.  This is going to be an interesting drive down to Italy.  Not.
KP seemed far more upbeat, euphoric and bouncy than me so went for a run alone.  I, on the other hand, just wanted to lie down in a darkened room with a cold flannel over my head and quietly die.
All attempts to lift my blackening mood and heavy head failed badly.  Even going out to make use of a Strada 2 for 1 didn't work.  So, finally, just like the O2 geek earlier, I threw the towel in and admitted defeat. Nothing for it but to go to bed.
Peace, quiet and dark at last.
Posted by Kokopelli Camping at 20:41