The strangest day of all.  The day of the final signing. 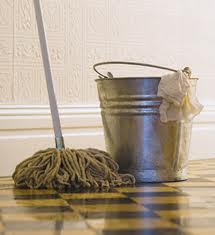 Our appointment wasn't until 3.30pm and we just didn't know what to do with ourselves.  It was the most beautiful warm and sunny day, ideal for climbing, but we thought better of it lest we manage to break a limb or two and not make the appointment this afternoon.  So, instead, we drove into Scafa and bought a mop.  As you do.

In actual fact, we bought quite a bit more.  All cleaning products so we can make an early start on the house tomorrow.  We also spent the best part of the day bickering.  Two managers again.  One wanting to prioritise one way, the other another way and both, of course, always right.

Teddies out of the pram time.  OK fine.  If you feel like that don't do it then!  Fine, I won't then.  If you think I'm going into business with  you, you can think again!  And so we went on until we reached the Notary's office.  A sideways glance and a muttered "f***wit" and we were friends again.

The meeting itself was hilarious and classically chaotic in the extreme.  We were the only ones seated on time.  The selling family, all five of them, arrived about half an hour late and squashed into the Notary's far too small office with nowhere near enough space or seats to go round.  There was also Ida, the translator, Enzo (geometra), the Notary and the Notary's assistant.  All looking very serious and sombre.

There was much coming and going, checking of documents, crossings out, flicking through files and shuffling of papers.  Eventually, an hour later, we began the formal process.  The Notary reading out the Deed to the sellers, Ida reading out the translation to us.  Word for word.

The banality of the proceedings was suddenly refreshed by a lot of activity on the Italian side of the table.  The gesticulating, animated voices and shuffling of papers had begun again.  Ida kept glancing up from her translation.  Something's not quite right.  "There's a problem" she said.  No shit, thought I.

It turned out that a capital gains certificate that should have constituted part of the Deed had somehow been forgotten.  And so we adjourned whilst the certificate, many pages long, was translated, typed and attached to the Deed.  Two hours later, 6.30pm by now, we continued. 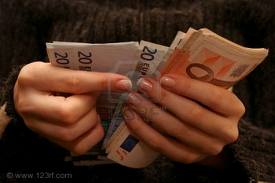 The most weird, and comical, bit by far was when we actually paid the family for the house and the professionals for their services.  We were given a list of who should have what and how the sums should be apportioned between cash and cheque.  For each individual (ie everyone of the eight people around the table).  The cheques that we had drawn up by the bank yesterday were each given out, one by one, checked in detail by each recipient and put into pockets.

The cash itself I counted out from the great wad KP had been guarding so closely since yesterday.  Each portion was carefully counted onto the table with everyone watching quietly and intently.  You could have heard a pin drop.  Terrified I might fall into a fit of giggles, I kept my eyes fixed firmly on the money I was counting and well away from KP.  To have met eyes with him now would have been fatal.

Each pile of money was then passed to Ida who recounted it and past it to the individual concerned.  It was then counted a third time before being finally accepted and put away.  A far more entertaining way of doing business than bank wire transfer.  Absolutely brilliant.

Finally, after four hours of sitting (or in some cases, standing) around the table, each page of the Deed was signed by each party to the contract, hands were shook, backs were slapped and the keys were handed over.  Done!  We'd bought a house!

We all retired to a bar over the road for more hand shaking and a raising of glasses with many cheers, chin chins and salutes.

Eventually, an exhausted but euphoric pair, we were picking our way carefully and slowly back to the Gallards through the dark and foggy streets of Pescara.  Not having eaten since breakfast that morning, we stopped off in Mannopello at a great little pizzeria with vaulted ceiling, ancient stone oven and cosy little tables.  With more raising of glasses between the two of us, we tucked into our pizzas greedily, enjoyed our wine and celebrated the day.

Tomorrow we move into our house.
Posted by Kokopelli Camping at 08:23