Italy On A Budget & A Bike

Indie Travel Challenge Week 10
http://www.bootsnall.com/events/indie/
While Europe’s infrastructure is typically a boon for travelers, much of the region has become more challenging for indie travelers these days. The euro currency makes everything way more expensive than it once was, and Europe’s popularity means it can be difficult to get away from big crowds.

What have you done in your own visits to Europe to make it more budget-friendly or to get away from the crowds? If you were going to spend several weeks – or several months – in Europe, where would you go (and why)?

Go to Italy, out of season and travel by bike without plan or agenda! 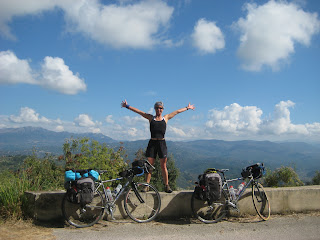 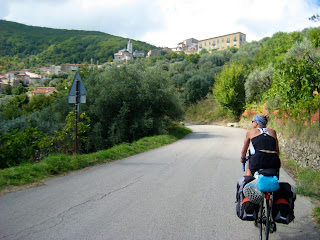 We arrived in Rome in October: two girls, two bikes, four panniers, a cooking stove and a tent.  We collected our bikes from oversized luggage, and lugged them in their bags that were bigger than us, one with wheels that didn't work and one with no wheels at all, all the way down to the train station.  First stop, Salerno.  The only part of our trip that was  booked and planned.   First tip: always have the first night booked.  Essential.  Don't underestimate how tired and disorientated you're going to be when you first arrive in a strange place.  As much as I will jealously guard the freedom and impulse of independent, "go where you feel, stay as long as you like" travel, it is rather nice and comforting to have a bed waiting on your first night.
And so there we were, sitting on the pavement outside Salerno train station, weary travellers, reassembling our bikes.  Or at least trying to.  Girls don't do things like that.  We'd attracted quite an audience of concerned old men determined to help.  Unable to persuade them that we did actually know exactly what we were doing and that we didn't, really, mind getting dirty at all, we let them do it.  It was far easier, and of course, more polite, to just sit back and enjoy the spectacle of these chaps debating and arguing amongst themselves.  Second tip: accept the culture, giving in gracefully to offers of help even if you don't need it - you'll make some great friends and your trip will be all the more richer because of it.  Eventually, after much back slapping, laughter and shaking of hands, we were on our way, struggling through the chaotic streets of Salerno, weighed down carrying our empty but unweilding bike bags and useless street map.

We pushed our bikes all the way to the B&B which, heart sinkingly, was at the highest point of the city at the top of the steepest of steep hills.  We showered and cleaned up, took advice from the very nice owner on the best place to eat, and went and devoured the biggest, best and cheapest pizza ever in a great, tucked away, little restaurant overflowing with Italian families of all generations. Babies, teens, grandparents, the lot.  Third tip: take advice on where to eat, eat local, avoid anywhere with translated menus, and don't be put off by scruffy exteriors.  Fourth tip: Italians eat late, and the further south you go, the later they eat.  So, if its the authentic (ie noisy & chaotic) experience of an Italian meal you're after, you won't find it before 10pm! 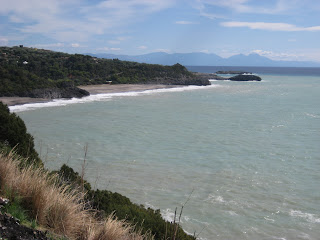 After a good night's sleep and a good breakfast, we filled our pockets with the croissants and fruit we were unable to eat (Fifth tip), persuaded the owner to let us leave our bike bags with him, attached our panniers and we were on our way, pedalling at last.
We had no idea where our next stop would be.  All we knew was that we wanted to head south and follow the coast.  We would rather have escaped into the mountains that were tantalisingly close, but earlier research had thrown up very few campsites in inland rural Italia (something we're trying to change with Kokopelli). We could have wild camped, I guess, but I do, actually, really rather like a shower. 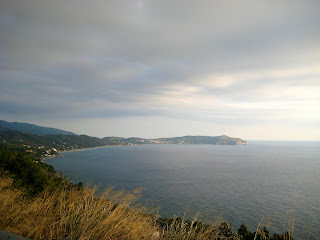 So  we followed the coast but what a surprising treat we had.  The coastline was absolutely stunning. And it was all but deserted. Miles and miles of gloriously empty beaches and roads.  Early October, and the weather was still warm enough to swim.  Sixth tip: October is the best time EVER to discover Central/South Italy - glorious weather, great prices, no tourists.
And so we spent our days.  Cycling all day, stopping, exploring, swimming in the sea, lazing on harbour rocks just watching the boats and the crystal clear sea. 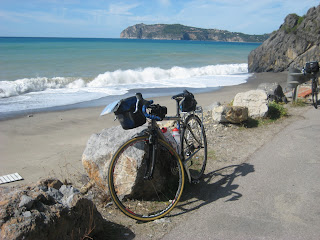 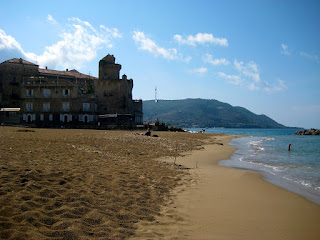 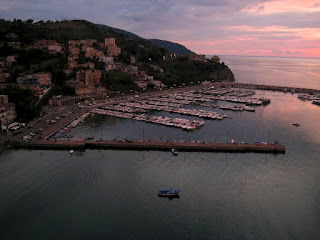 Just one problem.  All the campsites were closed. That's what happens in Italy.  It said so in my campsite guide, but I didn't believe it.  We will, surely, find somewhere.  But no.  All closed, locked, secured, empty.  Tumbleweed blowing where tents and campers once were.
Most hotels were closed too.  And restaurants.  Everywhere, clearly bustling and thriving in the months of July and August, was like a ghost town now.  All closed up.  Seventh tip: outside the main tourist areas of Italy, everywhere closes up at the end of August, but don't be put off!  Some real gems are to be found if you search a little deeper and think outside the box.
Initially a little concerned (underestimate), we soon realised that in most towns there would be one hotel with a caretaker.  Not exactly open, but not exactly closed either.  In most cases, the caretakers were posted in the biggest, poshest hotels and were more than happy for the company and to let us stay for a few euros, and in most cases they even let us choose our room!   The best in the house, dontcha know.
Such big hotels are usually avoided like the plague, but this was fun!  We were camping in these splendid places!  We had the best rooms in the house, with big beds, balconies and sea views.  And what did we do?  We cooked our supper either on the balcony or the beach, or took advice and found some great little restaurants with superb food and amazing prices. 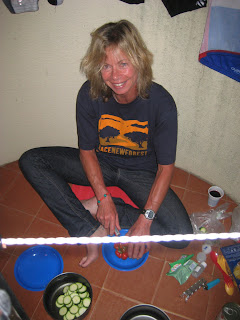 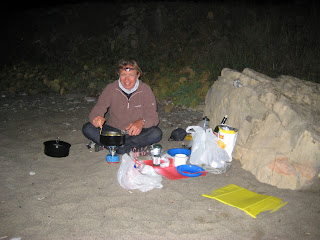 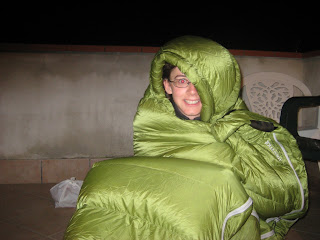 With full tummies, we'd  drag our sleeping bags outside and sleep on the balcony under the stars for a bit, before crawling back inside and finishing our sleep in these beautiful beds.  And what a joy it was to make breakfast on a deserted beach just as the sun was coming up, and then start the day with a swim. 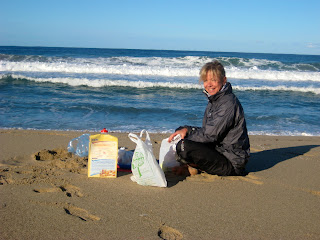 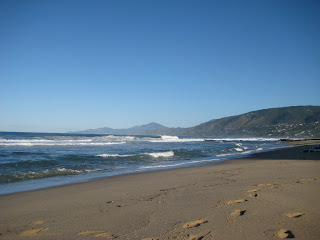 So my advice for getting the best out of European travel on a budget?  Early October in Italy is a great month, travel south for the weather, and take a camping stove!
Tips:
Kokopelli Abruzzo:  in the Majella foothills of rural Italia, superb tents only camping with some great self-catering options. Beaches, mountains, wilderness. Hiking, biking, climbing, chillin
www.kokopellicamping.co.uk

Posted by Kokopelli Camping at 11:27