The alarm went at 6.15am and we awoke feeling good, the excitement at long last coming through. With everything done the night before, even down to our bacon sarnie breakfast, we were quickly shutting down and closing up the flat and on our way out of Horsham.   Out into the dark and pouring rain with a very overloaded, but seemingly happy beastie.  A few little croaks and groans as she pulled out into the dismal day, but otherwise she purred along quite happily.

20 minutes later we were diverted through Crawley as the M23 was closed and, all of a sudden, we didn't see it coming, and BANG!  We'd hit a pot hole the size of a crater sneakily disguised as a little puddle.  That hurt.  Damage was inevitable.  The steering deteriorated fast so we pulled into a side street for a closer look.

Flat as a pancake.  But is that the only damage?  And guess where the spare is?  Yup, in the middle of the back, under absolutely everything.

Nothing for it but to change our Eurotunnel booking, phone the AA and empty all our careful packing out into the pouring rain.  On the side of the road.  All our wordly goods displayed in a rather comical way for all to see.

Ah well.  Time for a flask of coffee and the bacon sarnies me thinks.  Very well timed.  And so we sat huddled in our waterproofs with hands warming round our steaming mugs.  Amazingly with big grins our faces.  The adventure has begun!  We're back on the road again.  Travelling. 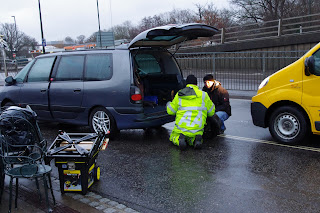 Mr AA man turned up pretty quickly but was all doom and gloom.   You won't get this fixed you know, too much damage to the rim.  A new wheel it'll be you'll be after.  Won't find one round here you know, you'll have to go to Renault.    And they'll need to order one in.... And so he went on and on and on. Idiot.

10 minutes later we were in Kwikfit and holding our breath as the nice kind man bashed out the dented rim and refitted the tyre.  Moment of truth.  Apparently alloys don't straighten, they just crack.   But no. Luck has apparently decided to rejoin the party.  So far.

OK. All seems fine, she's driving ok, no wobbles. Think we may have got away with it.

Arrived at the Euro tunnel just in time to jump on the 10.46am crossing.

Within no time we were driving up and out of the tunnel and into Calais, our excited high spirits were not at all dampened by the very dismal day.  Wet, grey and all rather bleak and, we were soon to find out, very, very windy.  But the wind didn't arrive in a nice steady stream.  Oh no.  It would suddenly launch at us from nowhere and, without warning, hit the beastie slap bang in the side.  Poor girl.

Poor us too.  Or rather, poor me.  We did have one fairly amusing incident.  Just as KP was overtaking a lorry I picked this moment (sometimes my brain never fails to amaze me) to undo my seatbelt and remove one of my many layers (it was rather cold when we left).  With the blinding spray and buffeting winds, this wasn't one of my most sensible moves.  With my head well and truly stuck in the too small neck of my hoody, I was temporarily blinded as I tugged and pulled.  I felt the beastie swerve sharply to the side.  Sometimes KP's humour just isn't funny.  This was not the time to start playing silly jokes.

I thought I was about to exit, fast, through the front windscreen.

It happened again.  Once my head was free, and before I could open my mouth in protest, one look at KP's focused concentration and somewhat grey pallor told me to keep my mouth firmly shut (for once).  Spray and wind were hitting us from all directions and we were alongside a lorry.  And snaking.  Oh shit.  Here we go.  This is going to be a very short trip.  A combination of the weight of our luggage in the back of the beastie, the gusting air, and the turbulence caused by the lorry, we had started to roll.  I thought that only happened to caravans!

KP put me right.  It seemed to go on forever, but it was probably only a nano second, before he managed to guide the beastie through it and settle down in front of the lorry at a nice sedate pace.

And so we continued through France.  Mile after long mile.  Slowly, steadily, respecting the wind.  Two hours on, two hours off, driving in shifts.

We had hoped to bypass France in a day, but our small fight with the big pothole in Crawley and the none too kind weather saw us reaching Strasbourg and calling it a day.

Boy, did we ever make the right decision!  What a great move!  Strasbourg was absolutely fantastic.  Completely unexpected.  One of the most beautiful cities I've ever been to.  So elegant and stylish.  Clean, fresh, modern in outlook and design yet wonderfully ancient, with all it's historic buildings proudly preserved.  The river gushing through the middle and the so ornate cathedral, with all its gargoyles and carvings, being just the icing on the cake.

We set Tim Tom the task of finding us a room for the night and, for once, he did us proud.  Slap, bang, in the middle of the city.

We both had a very welcome, long soak in the bath before going off to explore.  All the Christmas lights were still up, and what a display!  All over the city were shimmering, twinkly lights, frostings, baubles, snow and chandeliers.  Everywhere you looked, from the narrowest lanes to the widest boulevards, from the piazzas to the parks, it was a fairy-tail Christmas wonderland.

We were both awestruck and in heaven.  We did, however, have to sadly remind ourselves that we were not on holiday, but on a budget business trip without an expense account.  So, after we'd wandered around a little, ogling through shop windows, we settled into a lively little side street bar for some good, simple nosh and a half carafe of the local vino.

Despite the inauspicious start, what a good day.
Posted by Kokopelli Camping at 20:10