After being thoroughly spoiled over the last few days with the absolutely heavenly weather, today was just ghastly.  We lay in bed last night listening to the rain pouring down. We lay in bed this morning to it pouring down.  We got up to it pouring down.  And it didn't stop all day.  But it did give the water butt a thorough testing!  It worked like a dream.  Even the overflow pipe worked and water trickled beautifully all over the shrubs and trees next to it.  Not that they needed it, of course (it was raining).   Heady on the success of this project, we now have very grand plans for collecting surplus water from everywhere and feeding it all down to the vegetable and kitchen gardens, maybe even with some sort of gravity fed hydroponic system going on!  There will be no waste at Kokopelli!

As well as giving the water butt a through testing, the weather today also gave our roof a thorough testing.  With the rain also came a significant thaw, now was the time for any chinks in the armour of the roof to show themselves.  All we found was the tiniest little drip.  Not a problem and inevitable with so much snow, so we were told.  So we were very happy with our water tight little purchase.

The other good thing about today was that it gave us the perfect excuse for lighting the fire first thing, and keeping it going all day.  It just transforms the house.  And made it very comfortable for Roberto and his wife (still don't know her name) when they called round unexpectedly.  We were able to play the perfect hosts and treat them to coffee (definitely not tea this time, I used the old coffee pot that spewed coffee everywhere) in a warm kitchen.

After they'd gone we got on with our inside jobs of KP putting up a bathroom light and playing with the electrics, trying to understand the spaghetti junction and hotchpotch of wires sticking out everywhere.  We have a bedroom light that refuses to work.  A little error along the way resulted in him blowing up a socket (and almost himself).  He tried to keep that one from me, but the blackened plug and charred wall was a dead giveaway.  He did, however, managed to mend the bedroom light.

Leaving him to wander around the house with his electric tester thingy, and muttering his utter confusion to the wall and to the wires, I just beavered away at yet more cleaning.  This time preparing another bedroom for use and giving all the windows a good clean.  My mum would have been proud of me.

Much later, Sue and Enzo came round as arranged and we walked and talked them through our plans for the barns.  Having now had plenty of time to decide on exactly what we want and where, we've decided to accept that its far too big a project for us to manage alone.  We've realised that we need to bite the bullet and bring in a project manager.  Enter Enzo, Geometra Belli.

We spent a good hour with them talking about our plans in detail and going through KP's rather rough sketches, which I thought highly amusing but which were proving to be very useful indeed.  Enzo, a non-camper himself, was intrigued by our thoughts and became almost as enthusiastic us, throwing in a good few ideas of his own.  In fact, he even wants to come and stay in one of our tents when its all done!

Having finished outside, we all thawed and dried out in front of the fire as we then went through the finer details, we discussed solar panels and we considered the 'minor' issue of gaining the necessary permissions.  Obviously we've now got to wait for all the costings to come in, but we did give a whoop! whoop! when they'd gone.  Bloody hell, we're actually going to build a campsite!

The day was nicely rounded off with a really good night out with Tina and Richard, our first night out since we've been here!  We had no 'going out' clothes and felt like real country bumpkins, but it was a real treat.  Tina chose a superb little cantina in Guardiagrelle and Richard chose a selection of typical Abruzzese dishes for us to try.  The food was just superb and a really good evening was had.  We left feeling very warm, happy and full. 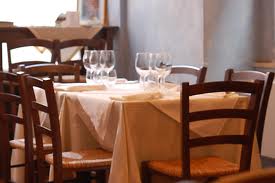 Posted by Kokopelli Camping at 09:26