Monday 31 January - the coach from hell

We woke up far too early, way before the alarm.  Being far too excited about going home and our day of travelling ahead, not forgetting, of course, that we had a full day in Rome planned too, I got up and started the usual clattering around, oblivious to the noise I was making.  Hiding in his semi-sleep state, KP's distaste of my morning habits was becoming a little evident from the grumbling and muttering coming from under the duvet.  I was clearly making far too much noise and chaos for his over sensitive "I don't like mornings" ears.  Tee hee hee.
Eventually, however, he did get up and do the very masculine tasks (far too difficult for mere females) such as turning off the water and electricity, whilst we waited for Ian to pick us up to take us to Chieti Scalo for our coach to Rome.  How very exciting!  A coach, a couple of trains and a plane to come!
The coach was absolutely rammed.  Hey, this is going to be fun!  Lots and lots of people to watch.  Our strategy for getting a seat was for KP to sort the bags into the hold whilst I was to leap on as soon as the doors opened.  Leap on I did, like some deranged mad woman and elbowed my way upstairs only to find just a small selection of single seats.  Bugger.  Not quite so much fun after all.  Now we're going to have to spend the next three hours sitting next to some nose-picking smelly stranger, and not even be able to look out of the window.  KP's not gonna be happy....
A short while later, a bit of a cuffuffle began and I was turfed out of my prized, hard won, seat.  Surely I wasn't that rough with my elbows?  Surely they're not going to throw me off the coach?  Looking very lost and bewildered, a kind stranger explained to me that all the seats are numbered and reserved.  A quick look at our tickets showed we should be sitting in 3 and 4.  How was I supposed to know that?  The numbers, where they existed at all, were under the seats.  Not obvious at all.  So we went downstairs, tails well between our legs, and started the turfing out process of our seats 3 and 4.  The driver was ill amused.  Not wanting to cause any further chaos or upset, we accepted his suggestion that we settle into two seats that weren't 3 & 4 but which were still together.  Yup, that's fine.  The cloud then came down and we drove all the way to Rome in a real pea souper with no views at all.  Oh dear.
KP muttered and grumbled all the way to Rome about how I've made him go on the coach from hell when we could, quite easily, have gone the 30 minutes to Pescara for a simple flight home to Stanstead.  But who wants to go to Stanstead?  That's just boring.
We eventually got off the coach from hell at Tiburtina and then, after a bit of confused tourist aimless wanderings, we found our way to the train station.  A train now to Fiumicino airport was needed so we could leave our bags in the left luggage.  So off we trundled.  Stopping at every single stop.  None of the toilets were working and I was absolutely bursting.  This is just getting worse and worse.
We finally made it (with my bladder in tact), dumped the bags and grabbed a shuttle service into the centre of Rome.  Now this was fun!  The guy driving was a total lunatic.  This is how you drive through Rome!  He knew all the tricks and short cuts, neatly weaving in and out and cutting everyone up.  Absolutely brilliant.  At one point, he even made a sharp turn to the right and shot up the tram lines!  Gumball rally eat your heart out!!!
Having done all the usual monuments a few times now, we decided to hit the north western section of the city and explore the shops and the parks.  Our crazy driver dropped us off at the bottom of via del Corso and we walked its entire length, diverting every now and then down fascinating little side streets with far more interesting shops.  I managed to find a great pair of sunglasses, which KP kindly treated me to (thank you KP), and tested his patiene to the limit by trying on loads and loads of boots.  Unfortunately the only pair that were any good were different colours (one having faded in the sun).  Tempting, but no.  KP, on the other hand, resisted the smart designer shops and chose instead the immigrant street sellers and bought some strange splat things that you chuck hard on the floor. 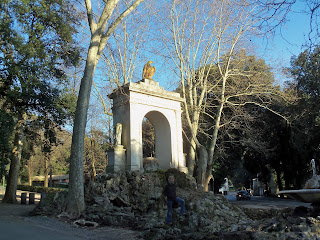 We wandered briefly round the Spanish Steps before finally stopping at a bar in the Piazza del Popoli.  Beautiful spot.  And what a great time to visit Rome.  January.  Not too cold, quite warm actually, beautiful sunshine and barely any tourists.  Not a single American to be seen or heard.
We worked our way back to the station via parks and leafy avenues, stopping at a little pizzeria for an early supper along the way.  By 7.30pm we'd found our way back to Fiumicino via another train, retrieved our bags, checked them in and settle down to sit out the interminable wait for our delayed flight.  The actual flying I love, everything else is just so uncivilised.
1am and we were finally home, walking through the door to the most unholy stench.  Deep joy.  The fridge-freezer has gone off and a joint of decomposing beef has bled everywhere.
One for the morning.
And then for the next exciting phase of Kokopelli.  Lots to do now before we go back in April :-)

Posted by Kokopelli Camping at 15:18 No comments:

I'm sitting here in the armchair, absolutely roasting in front of the open fire in the kitchen.  Classical opera is playing in the background, snow is still on the ground, and my tummy is warm and full with chicken and mushroom pasta, tomato salad, olive oil and washed down with red wine and grappa, all fresh and locally produced.  We've just been outside for one more look and marvelled at the silence of the star encrusted skies, the silhouette of the mountains on the horizon, and the little twinkly village lights dotted around the hills.  Every now and then the sky is illuminated with flashes of distant storms and a dog or owl breaks the otherwise total peace.  It's going to be very strange being back in Horsham tomorrow.

We did have a good day, clearing up and cleaning ready to go.  Its nice to be leaving the house happy and smiley awaiting our return in April.  There are logs in the basket and kindling drying, all ready to be thrown on the fire as soon as we get back.

Everything was packed by mid-afternoon and the sun was trying to break through an otherwise watery sky, so we wrapped up and went for a long walk into the hills in the still deep snow.  We hadn't gone far before our footprints merged with those that shocked us both.  They were huge.  About three times the size of a large dog, big furry bits were definitely surrounding them and there were obvious long claws.  Bear.  Without any doubt.  Indisputable.  Local, brown, Marsicano bear.  So what did we do?  We followed its prints.  All very well whilst we were following it, but a little unnerving when he disappeared off into the trees.  Was he now circling around to attack from the rear?  But even if he had gone for now, there were always the cinghiale (wild boar) tracks to entertain my far too over-active imagination.  Or those dog prints that looked suspiciously like wolf?

And so we carried on our walk into the Abruzzo wilderness, with me struggling with the depth of the snow and looking over my shoulder every couple of minutes, or peering into the trees, keeping a watch for ambushing wild animals.  KP, on the other hand, with his legs twice as long as mine and with nothing like the kaleidoscope imagination that I have been blessed with (thanks mum), just covered the ground effortlessly, blissfully oblivious to the dangers of any marauding beasts.

After a while, both getting a little nervous about which track is the right one to Roccamontepiano, and running the risk of getting lost in this white covered wilderness for ever, we decided to hanger left and work our way back towards Garifoli and the way we came.  We started to feel a little more confident when we came across some human footprints.  We must be nearing civilisation, which was good news.  Unless, of course, the footprints belonged to some deranged axe murdering mountain man, or we turn the corner and find the snow all churned and turned a blood red sort of colour.

Either way, we were definitely more confident and walked along with a spring in our step having fun trying to work out who the footsteps belonged to.  Was it one person or two?  Not a dog walker, as no dog.  Someone out shooting maybe?  Eventually, as the path widened, the walker became two.  No longer single file, but walking side by side.  A big person and a little person.  The bear prints returned, not good news, but then if he's tracking the other people he won't be hungry when he finds us.

The track started to look familiar.  I'm sure we've passed this point before?  Yep, we definitely have.  Oh my God.  We're back where we started.  How the hell did that happen?  If that's the case, which it clearly was, then the footprints we've been following....

The big person, and the little person...

Me thinks Khimo-sabi and Tonto need a bit more practice before they're wilderness trackers.  Best stick to the day jobs for now, huh?

And so we wandered back to our cosy little kitchen, an early supper and an early night, all packed and ready to go early in the morning.
Posted by Kokopelli Camping at 11:59 No comments: