ANCIENT GRAINS OF ABRUZZO & THE SCOURGE OF MODERN WHEAT

WHY OUR BREAD IS MAKING US ILL

I didn’t even know it was until I starting reading up on the ancient grains of Abruzzo, simply because they fascinated me.  Then I started to dig deeper and to get angry and now it all makes sense.  When I make my own bread I have always favoured spelt flour and never knew why.  Now I do. 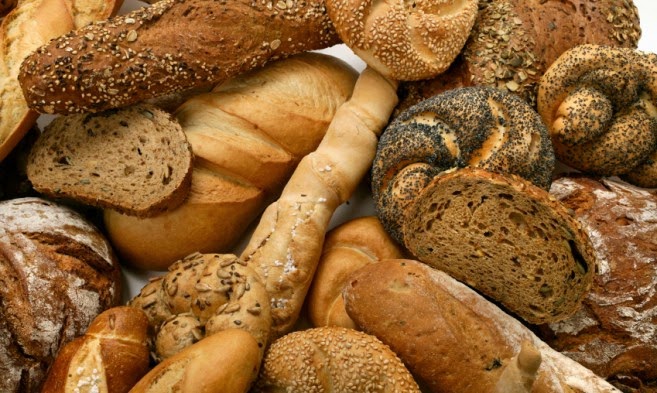 The wheat products we eat today may often look and taste totally delicious but they bear very little resemblance in their nutritional and genetic make up to those from merely 50 years ago.

Grains have been at the heart of our diet for thousands of years. They are easy to cultivate and store and are full of fresh life and nutrients.  Bread.  The staff of life.  But not any more.  Wheat has been subjected not only to some of the most intense cross-breeding efforts ever seen, but also to irradiation of wheat seeds and embryos with chemicals, gamma rays and high-dose X-rays to induce mutations. 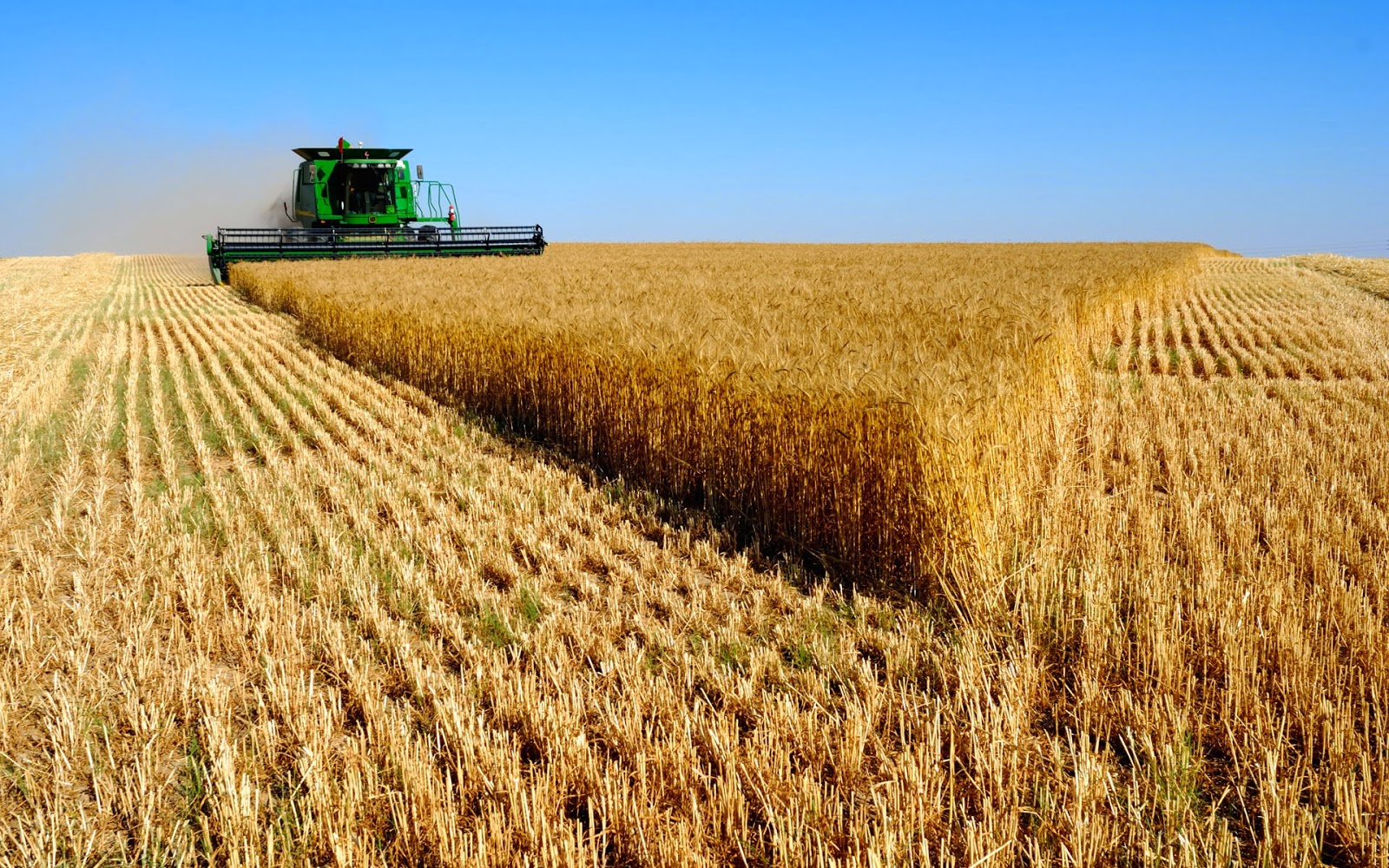 The aim has been to produce a high yielding crop; one that is resistant to disease, pests and drought and has a long storage and travel life.

All of this has been achieved, but wheat has now been hybridised to such an extent that it has been completely transformed from its prehistoric genetic configuration.  It is now postulated that the protein structures have been changed so much that toxins have built up within the grain to the extent that they naturally repel insects and pests.

An achievement of an aim perhaps, but if rats don’t touch these grains, do they know something we don’t? 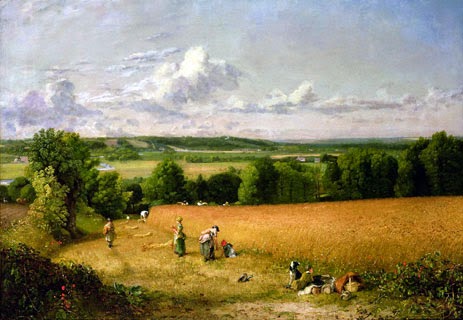 Wheat doesn’t even look as it did just 40 years ago.  Rather than the tall and elegant plant wafting in the breeze of Constable’s England, we now have a stocky little plant struggling to support its oversized high-yielding head that is made all the more productive by complimenting fertilisers and pesticides.

And it’s safety for human consumption has never been questioned or tested.

But the problem doesn’t end there.  Not only do we have an unhealthy, modified, and hybridised strain of wheat, we have also removed and further degraded its nutritional value by processing.  Modern steel roller milling methods may produce the purest and finest of white flour at low cost, but they also eliminate those portions of the wheat kernel that are richest in proteins, vitamins, lipids and minerals.

Buying “healthy” whole wheat flour isn’t quite the answer you’d expect it to be either.  Sadly, “whole wheat" is often nothing more than white flour with some bran added back in. There’s nothing “whole” about it.  Stoneground, “whole meal” flour is slightly better, the entire wheat kernel is ground and the germ is crushed into the flour, but you are still dealing with (in the most cases) a grain that has grown from a mutant seed in synthetic soil bathed in chemicals.

Is it therefore surprising that, in the last 40 years, cases of people “gluten intolerant” has grown by over 400%?  Yet, many who cannot eat wheat seem remarkably fine with ancient grains, even when they contain gluten… 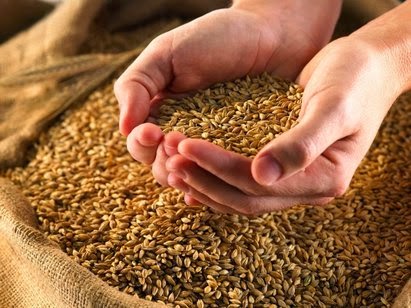 Ancient grains are virtually unchanged from what they were thousands of years ago.  They are free of hybridisation and genetic modification and have a higher nutritional value than modern wheat.  They are a simpler, purer food, just as nature designed them and you can supplement any of them for modern wheat flour in breads and other recipes, in any way you like.

Furthermore, many are still grown here in Abruzzo and what follows is a brief introduction to the more common ones (ie, easier to find). 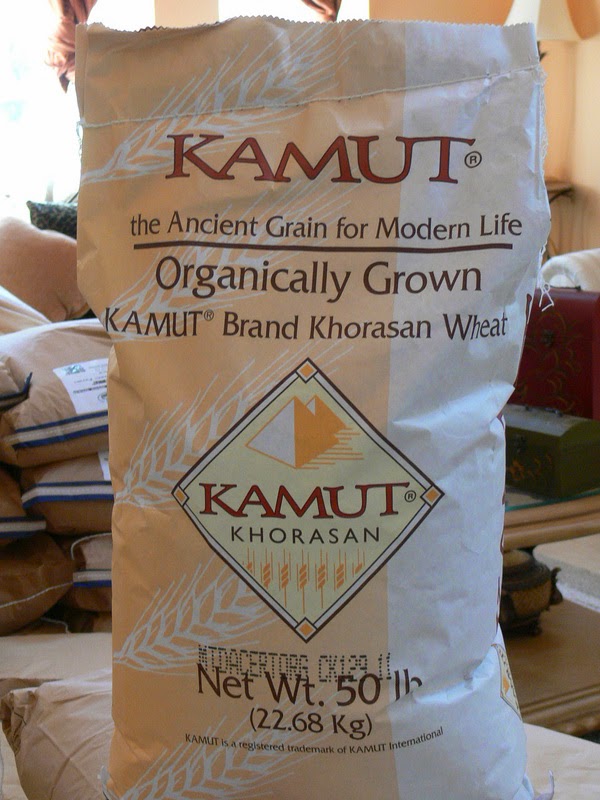 Firstly, however, we must start with Kamut®, for the simple reason that it is the better known ancient relative of modern wheat.

It is important to know that Kamut® is not a grain in itself.  It is the trademark of khorasan wheat, which is grown mostly in American and Canada and sold all over the world at high prices.  The company justifies the cost with the fact that it is a high quality organic product, free of genetic modification.

That as may be, but if you’re not in America and if you’d rather not add to transport miles, the following are all excellent alternatives, all displaying similar nutritional properties of khorasan wheat, all still intact with their ancient gene pool, and all grown in Italy, all grown in Abruzzo.

THE ANCIENT GRAINS OF ABRUZZO

The list of grains grown in Abruzzo may never end.  Some of them have already been lost over the centuries, but many are still thriving with their cultivation and protection being jealously guarded.  Here are just a few of the most popular and fairly easy to find: 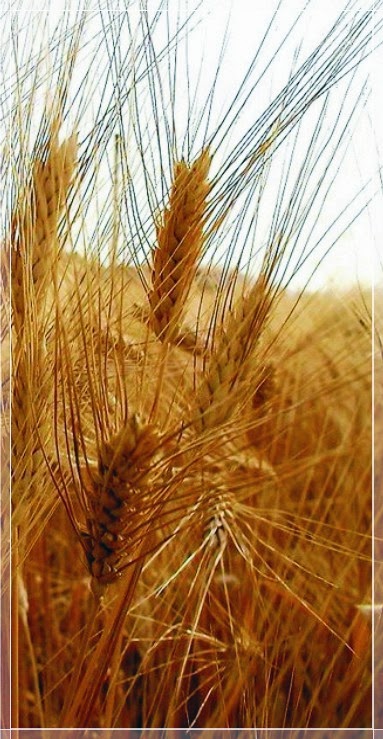 Saragolla wheat has been grown in Abruzzo since at least 400 AD and can be considered one of the founders of modern durum wheat.  The remarkable quality of this cereal was highly sought after for pasta making in Naples as it was considered the best durum wheat available.

In common with other ancient wheats, Saragolla contains a higher content of protein, lipids and minerals than modern wheat.  The grain is still used today for high quality pasta distinguished by it’s beautiful yellow colour.  Saragolla also has excellent cooking properties and is superb in many dishes due to it’s intense and spicy flavour.

This soft wheat is high in protein and is grown mainly in the mountain and foothill areas of Abruzzo, where it has been cultivated since at least 1500. It is particularly suitable for organic farming methods as it is naturally resistant to weeds, cold temperatures and poor soil.  Despite being low in gluten, Solina has always been used in bread making, shaking off the myth that you can only bake bread with “strong” bread flour. 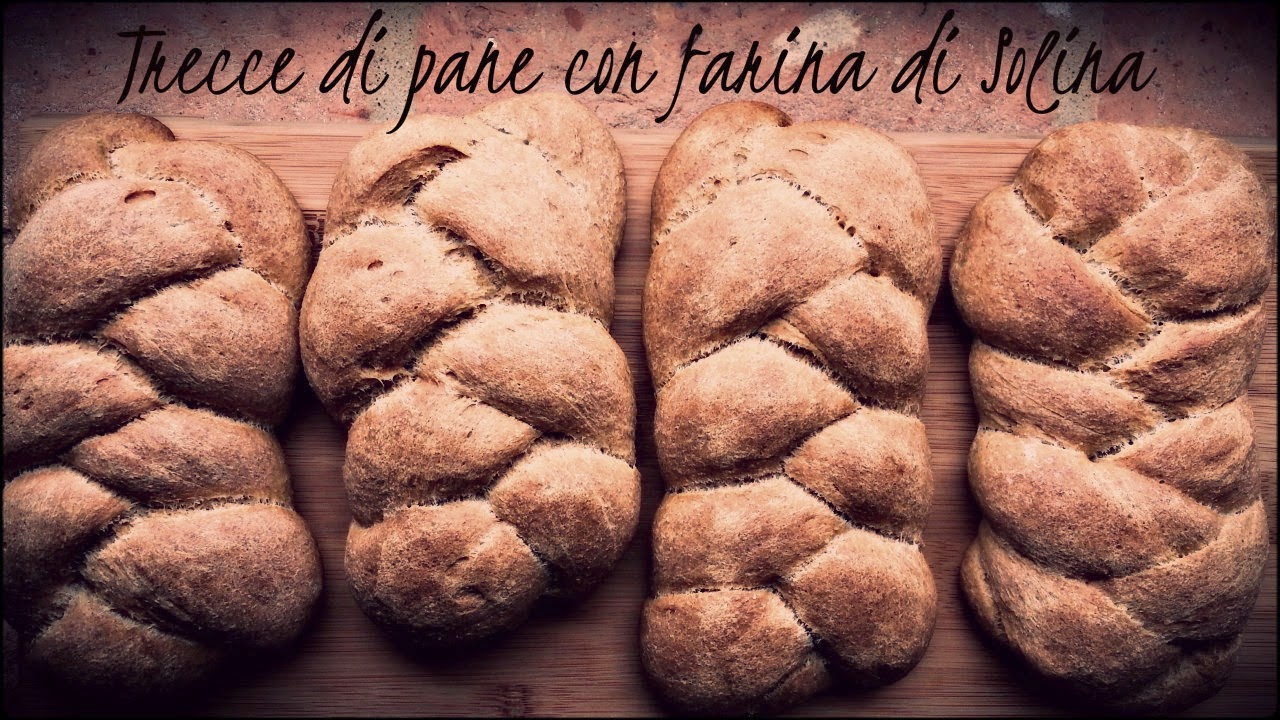 The ability of this grain to survive in poor soil and hostile weather has, in the past ensured the sustenance of families and, therefore, their survival.  The quality and authenticity of Solina are still appreciated by many farmers today who admit that they cannot do without the taste and scent of the bread and pasta made from this cereal that is often referred to as “the mother of all grains”.

Another superb alternative to Kamut® is Senatore Cappelli, an excellent variety of durum wheat.  Again, it has never been genetically modified and is rich in lipids, amino acids, vitamins and minerals. It is also easily digestible. The flour of Senatore Cappelli is considered perfect for making sourdough breads.

Gentil Rosso is the oldest of Senatore Cappelli durum wheat varieties, called “Red” for the colour of the ripe wheat ear. The flavour of Gentil Rosso is very intense and gives the bread a characteristic aroma, making it ideal for break making, pizzas and cakes.  It also has a very low gluten content making it perhaps better suited for flat and unleavened breads.

There is some confusion as to what farro is due to three different species all being called farro in Italy.

Emmer is by far the most common variety grown in Italy and is considered to be of a higher quality for cooking than the other two grains.  It’s sometimes called "true" farro and is often confused with spelt, although it is an entirely different species.

All three are ancient ancestors of modern wheat and date back to at least 12,000 BC, a time when farro was the staple food of ancient tribes.  In common with the other grains, farro has not been subjected to intense human selection and retains its ancient gene pool.

Although farro can be purchased in milled form as a flour, it truly comes into its own as a whole grain cooked and eaten as an alternative to rice, or as a salad combined with raw vegetables and drizzled with olive oil it is utterly delicious.

As to its nutritional make up, Farro has few carbohydrates and calories, more protein and more fibre compared to wheat or durum wheat.  It contains minerals such as sodium, potassium, calcium and iron and has 40% more magnesium.  It contains vitamins from the B group but it must be noted that it is low in amino acids such as lysine, so therefore it is recommended to eat farro with beans and vegetables.

No account of the ancient grains grown in Abruzzo would be complete without mention of Grano Saraceno, or buckwheat as it’s more commonly known.  Grano Saraceno is not actually a type of wheat, but a “pseudo-cereal”, a fruit seed related to rhubarb and sorrel. The triangular seeds of which are known as buckwheat groats. 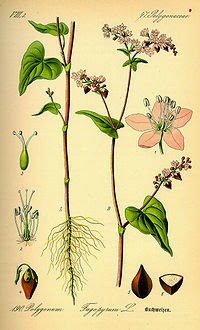 Saraceno is low in calories and has been providing essential nutrients, vitamins, energy, and fibre to humanity for approximately 8,000 years.

The protein in buckwheat contains the eight essential amino acids and is also high in lysine.  Buckwheat is also rich in many B vitamins as well as phosphorus, magnesium, iron, zinc, copper and manganese.

A 1995 study from the Johns Hopkins Medical Institute showed that eating 30 grams of buckwheat daily can lower blood pressure.  What is more, because buckwheat grain is digested more slowly than other carbohydrates it can leave you feeling fuller longer and improve glucose tolerance among the carbohydrate sensitive.  It is also gluten free.

Grano Saraceno has a strong, distinctive, slightly sour and nutty taste.  The groats are used whole in hot cereals, soups and porridges and is a perfect substitute for rice.

Not particularly easy to track down if you're outside Italy, but it is worth the effort.  Amazon and Ebay are good starting points for finding the companies that are happy to ship abroad.

The following are a selection I have come across, but not used due to high shipping costs - for once it's cheaper to shop in store than it is online.

Any of these are worth a punt:  Directory of health stores in Abruzzo: http://bio.tuttogreen.it/bio/elenco/negozi/abruzzo/

If anyone comes across any more, I would love to know so please share with everyone by leaving a comment below.

To round off, a few suggestions as to what to do with your grains once you have them.

1.  A lovely account of the ancient grains of Abruzzo from Majella Home Cooking, with a delicious farro & cheese recipe at the end:
http://www.majellahomecooking.com/2013/09/17/cultivating-diversity-in-abruzzo/

A couple from me (I'm no foodie, but these work pretty well): 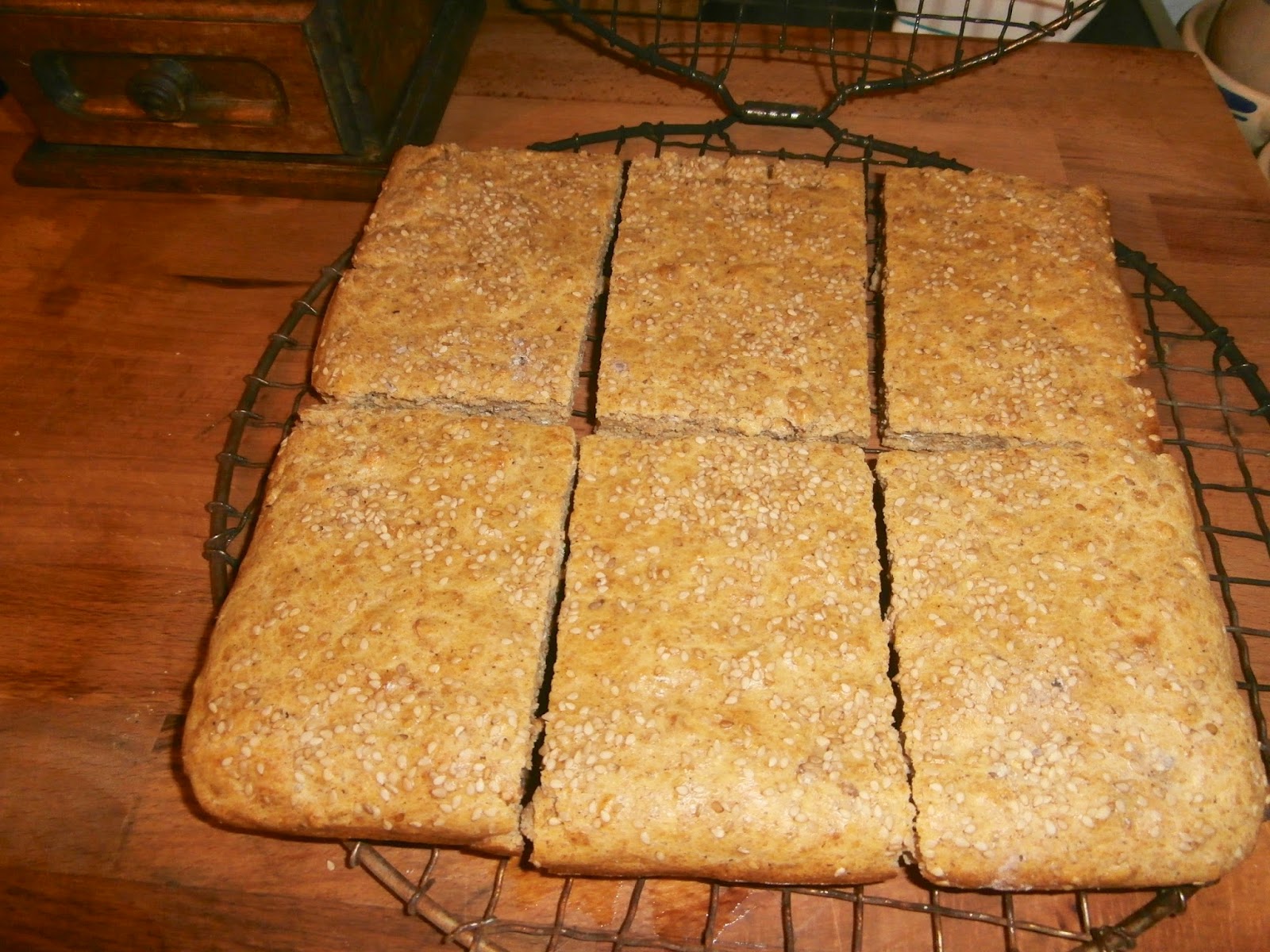 Mix all the dry ingredients together.  Add the beaten eggs, oil and enough water to make it reasonably easy to pour.  Tip into a well-greased baking sheet (ideally with sides).  Sprinkle with sesame seeds.  Bake for 15-20 minutes in a 220 celsius oven. 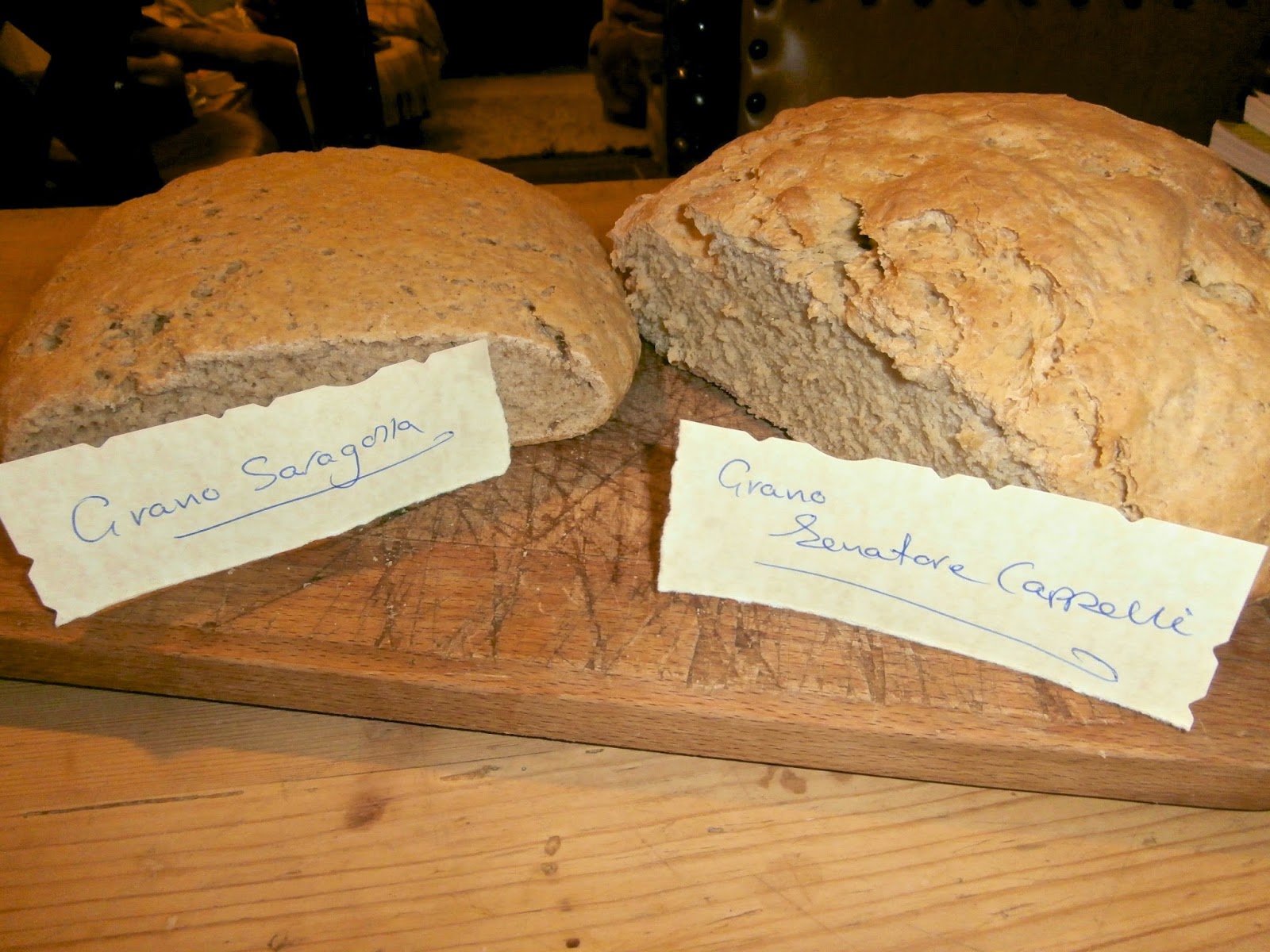 Put the flour, yeast (crumbled if you're using fresh) and about 200ml of the warm water into a large bowl with a glug of olive oil.  Mix well, adding more water if necessary - it needs to be pretty messy and sticky - then start kneading on a floured board (or in a mixer with the dough hook).  Knead for at least 12 minutes until you have a good, elastic dough.

Form the dough into a ball, put in a warm bowl lightly coated with olive oil (turning the ball once to ensure covered with the oil), cover with clingfilm and leave in a warm place to double in size (usually 1-2 hours).

When risen, give the puffed up ball a punch to knock the air out of it, a light knead (no more than one minute), form into your loaf shape and put it on a baking sheet.  Cover loosely with your clingfilm and leave again until it's puffy and almost double in size (about half an hour).

Posted by Kokopelli Camping at 13:10