Sunday 16 January - the house is ours!

The next two days were spent in something of a cleaning haze, both working Mazlo's theory to perfection.  The incontrovertible priorities, without need for discussion or debate, were to satisfy our very basic, primeval needs unchanged since prehistoric times.  Food, warmth, shelter and clothes.  And so we set about ensuring we had somewhere to store, prepare and cook our food, somewhere to wash our clothes, somewhere to sleep and a fire to warm ourselves by at the end of the day.

We hadn't long started emptying drawers and pulling out cupboards when two of the brothers arrived for one final look at their parents' old home.  Their family home.  We stopped work whilst they wandered around, feeling terribly awkward and very sad for them to see two strangers emptying their house of their parents' personal effects.

The house almost seemed to have been stuck in a very eerie timewarp.  There was a calendar hanging in the kitchen dated 2003, there were old newspapers going back to 1997, there were old photographs, letters, children's school projects.  There were clothes in drawers, shoes under the stairs and unfinished knitting.  There were jars and jars of homemade produce, clearly many years old, gathering dust amongst the shelves.  There were seed packets and saved recipes.  All were emptied from drawers and dumped on the veranda outside the door ready for sorting into the pile for burning, the pile for scrap metal, the bottle bank and for taking away shamefully to landfill.  How very sad that two lives and the lives of a family should have come to this.

For two days we worked solidly and for two nights we had huge bonfires in a clearing amongst the olives.  Slowly but surely the house began to live and smile again.


By the end of two days we had a cosy and workable kitchen pulled together from salvaged items.  We had a gas hob, but no oven yet (a plug needs to be sourced and fitted), a fridge freezer, a drawer full of old cutlery and cupboards full of crockery and pans.  All squeaky clean.  Very basic maybe, but a start.  Our kitchen even had a table and chairs and two battered armchairs in front of the open fire, the only heat in the house.

We had three bedrooms clean and cleared and awaiting beds, and two functional bathrooms with the unexpected but very welcome bonus of hot running water.

Our bedroom was selected and our new bed made up, the little cantina was cleared, scrubbed and brought back to life.  Its pizza oven was revealed and the old stone sink, complete with scrubbing board was once more in use.  Sadly, the rusty old washing machine revealed a fatal leak and found its way to the landfill pile. 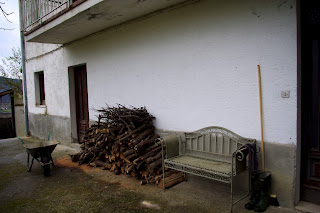 The weather, whilst we were working, was just glorious and totally unexpected.  Brilliant blue skies and a warming winter sun gave the scene an idyllic domestic hue.  Each time I went outside to add more rubbish to the piles my breath was taken away by the landscape around me.  Was this all really ours?  Are we really here?  The soft, round hills of the lower Maiella, the snow covered glistening tops of the Passo Lanciano pistes and the sharp and dramatic white peaks of the Gran Sasso massif appeared close enough to touch.  I just stared and stared.  Never has hanging washing out created such a blissful feeling of self-indulgent pleasure.

Posted by Kokopelli Camping at 08:46