We didn't want to, and didn't like breaking our self imposed supermarket embargo, but we did have rather a lot of shopping to do.  Lame excuse I know but we did try and balance it by ordering all the meat and arrosticini from the village butcher, and all the veg and salads were coming from the Fara Filiorum market.


And I am so so sorry, but our lack of kitchenware meant plastic plates and cutlery to add to the swirling plastic mass in the Pacific that is the size of America (www.independent.co.uk).

Conscience aside, we did have a good day.  Never before have I prepped for a party in such a chilled, happy way.  OK we did go to the supermarket, but it was hardly running the Sainsbury's gauntlet, and wandering around the market, picking out the salads, was a joy in itself.  But the highlight of the party shop was stopping to pick up fresh yeast and milk in Roccamonte and finding the door closed.
Confused, I tried the handle.  It opened to reveal three ashen faced ladies, one holding a poor yowling cat suspended over the shelves trying to push it underneath.  What the... ?
The door was quickly closed behind me with the words "Serpente!" "Serpente!" being uttered with some urgency.  Lucca, Tomas's brother came in next.  So there we were, three crazy ladies, a little boy, me, Lucca and a protesting cat all scrabbling around on the floor of the tiny corner shop trying to find an uninvited snake.   With all that noise, chaos and commotion, I'm sure the snake was long gone.  Which is a shame really, because I'd have loved to have seen the scene if the snake was actually found!
What a way to start a birthday eve.
And what a way to finish it.  With the most amazing lunar eclipse I have ever seen.  Expecting it at 10.30pm we needed to find the moon and the optimum spot.  The night sky was cloudless, we were in for a real treat.
But could we find the damned thing?!  Expecting it to be coming up opposite where the sun went down, we needed to somehow get around the Montepiano, a bloody great big hill behind us and right in the way.  First we went one way.  But no.  The hill was too vast.  The moon will not be able to get over that in time.  Then we went the other, but with some urgency in our steps this time.  Time was getting on.  We're young to miss it.
So we practically ran all the way round to see if it would be peeking out the other side.  Not too pleasant when you've only just finished eating.  So with an aching tummy, a stitch in my side and an increasing fear that KP was about to drag me off-piste into the black wilderness beyond the safely but softly illuminated village lane, I became a reluctant, grumbling, passenger.  Absolutely no way, no how was I going to go into that black, cinghiale and snake filled forest.  There might even be the odd random deranged axe murderer or two.
I knew what was coming.
"I'll just take this track and see what's round the bend".  Oh God.  Here we go.  But no.  My safety cut off switch was flicked.  Not a chance.  I'll wait here whilst you have a look.  But did he stop at the corner?  Did he hell.  The moon still eluded him. 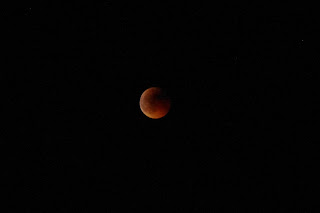 Getting rather nervous about being eaten by a troupe of marauding cinghiale, or being chopped up by deranged axe murders, I called.  Nothing.  I called again.  Still nothing.  Self preservation kicked in and I left KP to his fate in the dark woods and scarpered.  I didn't stop running until I got back to the safety of our little house.  And the biggest  moon you have ever seen.  There it was.  Glowing a deep, dusky red over our garden.  A total eclipse.
KP followed not long after, somewhat disgruntled to have been abandoned by his wingman.  The spectacle in the sky quickly and neatly diverting any clash of, errr, interests.  Just. 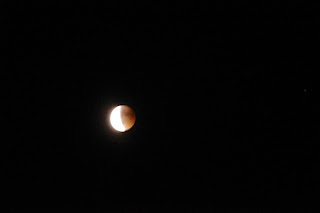 It was beautiful.  And everything was so still and quiet, not even a dog barked.  Such a rare treat that just lasted and lasted all the way through till beyond midnight.  Eventually the Earth's shadow slowly receded from the face of our closest planetary neighbour and she started to shine in all her glory once more.
Not a bad way to start a birthday.
Posted by Kokopelli Camping at 15:33