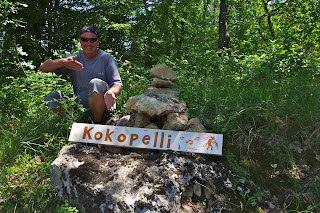 The rest of the day was spent in something of a domestic bliss.  KP sorting the tables, chairs, tidying and lighting, as well as painting a fabulous Kokopelli sign.  Seeing this party as something of a birthday-come-housewarming we thought it was time to start introducing the Kokopelli brand.  And his home-made sign was just perfect.
I, on the other hand, spent the day in the kitchen, gloriously cool as the sun beat down outside.  Four loaves were churned out along the table to oven conveyor belt.  As were various salads of tomatoes, fresh basil & oil, green salad from the garden, rocket & parmesan, plus two newbies for me: farro insalate (recipe link) and panzanella (recipe link).  As soon as the butcher delivered the meats, kebab skewers of beef, sausage, sage and pancetta were pierced together.
I did have a bit of a confidence crisis, part way through knowing how particular the Italians are about their food.  What on earth are they going to make of my Anglo-Italian massacre of such fabulous ingredients?  And there is just so much of it!  How silly will I feel when all they do is pick and I get left with a table full of food.  Such waste!
Once most of the food was done, I wandered up the lane collecting wild flowers to dot around the tables.  The table clothes and candles were put out, wine and glasses were spread around and beer and water were put into a large tub of cold water with icepacks. 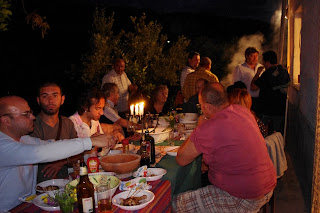 People started to arrive, the salads and cold meats were delivered to the tables and the barbecues were fired up.  Like all parties, it was a bit of a slow start but it didn't take long.  As soon as the Sports Bar crowd arrived, boy, did we rock!  They just kept coming and coming!  They dived into the food, took over the barbecue, lit the arrosticini burner and cooked the delectable little skewers of lamb.  KP greeted his guests and I kept refilling the food bowls, taking round meat and cutting more bread. 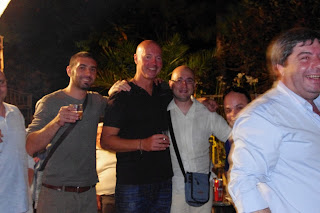 My earlier worries about the food being all wrong were completely unfounded.  These people could certainly eat!  And they certainly liked a party.  Just brilliant.  As always, the old and the young, helping themselves to drinks, food and taking turns on the barbecue.  And the presents!  Totally, totally overwhelming.  The house was just full of them.
And then came the speeches, with The Major leading the way, followed by the hip, hip hoorahs and even a perfectly sung English rendition of Happy Birthday! 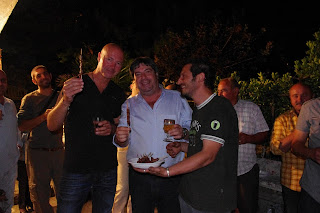 Finally, come midnight and with our dinner table, fridge and kitchen looking like a teaming mass of locusts had just swarmed through, the first of our friends started to drift away.  2.30am and we eventually fell into bed.  Happy. 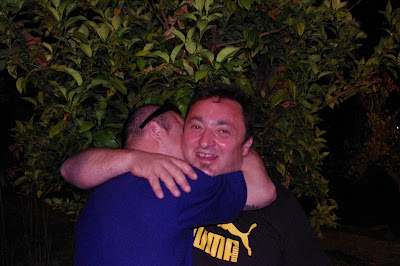 Posted by Kokopelli Camping at 22:55