Thursday 9 June.   Night-time, dark and peaceful.  All quiet apart from the crickets, frogs and the occasional owl.


I looked.  And my blood ran cold.  The forest was on fire.


Oh God.   Does anyone know?  Has anyone called the fire brigade?  What's the number?  What's the Italian for fire?


But then the fire started to burn suspiciously in the shape of a cross.  Forest fires don't do that.  The binos confirmed it.  Yep, we have a massive cross burning on top of the hill.


8am the next morning, it started with a bang.  And then another.  And another, and another.  Ear splitting booms echoing round the valley and bouncing off the mountains.  Then came the fireworks and firecrackers.  We were under attack.  Mortar fire!

But no.  It was Festa time!  Four days of full on partying had begun.  Time to celebrate the patronali festivities in honor of Sant' Onofrio and Sant' Anthonio (The Patron Saints of Serramonacesca).   The cross on the hill, the fires of Sant' Onofrio, shone bright red and the brass band could be heard playing in the village.  This is going to be fun!

But how on earth do they do it?!  It really was four full days of party, party, party.  The village just shut down.  A Serramonacesca bank holiday.  The streets outside the two bars and around the piazza were lined with tables and benches and were full of people, no matter what time of day, it was always full.  It was very exciting, such a buzz!

Friday night and it all came alive.  And Saturday night.  So many people packing out the streets.  Bands in the piazza, pizza wagons, arrosticini (wiki Arrosticini), hamburgers, brightly lit stalls selling all sorts of gaudy, sparkly goodies.  These people knew how to party.

So lucky we are to have fallen in with such a fantastic crowd.  Our early fears of coming out here, the expats, the holiday homers, driving up the property prices, muscling in, just hasn't happened.  The language problem?  Not a problem.  Communication is so much more than just words.

Sunday night we gave it a miss.  Totally pooped.   Far too many late nights, too much cycling or walking in and out of the village every day (the no car pledge for trips under 5km in full swing now), plus a two hour punishing Sunday morning bike around the hills had taken it's toll.  Either that or we're just getting old and four days of festa is just too much?! 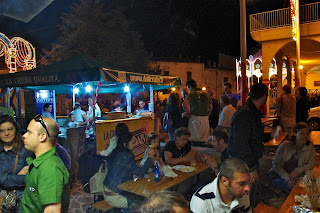 Whatever.  But, boy, did we make up for it on Monday!  The final night, and it was going to be good.  What a brilliant time.  Once again, everyone in together, shoving up, squashing along the benches.  The drinks were flowing, food was ordered, shared, everyone diving in.  Chat, banter, laughter.  New friends, old friends, the old and the young.  This is absolutely brilliant!


And the burning lady!  What utter madness!  What the hell was that all about?!  A figure dressed as a lady in traditional costume complete with a dolls head on top, was dancing around the piazza.

With fireworks attached to her head.

A bit too much.  The lips going numb was the first sign of things to come.  But, hey, this is good!  The drinks kept flowing and we had the best night ever.  The fireworks at midnight were a brilliant finale.  Launched from the hill opposite, they were fantastic.  One after the other, absolutely superb.


Eventually we starting making our weary, wobbly way back up the hill to Garifoli.  Thankfully picked up by Graham and Sharon before the start of the evil climb.  At least I think it was them.  Things did get a little blurry and hazy......

Tuesday was spent on the sofa.  All.  Day.  Long

Ahhhhhh festa time.  Roll on the next one.
Posted by Kokopelli Camping at 14:15