What a fantastic day!  Totally Starstruck!  Giro d'Italia and a Mark Cavendish win.  And we were there.  Absolutely brilliant.


The morning we spent cracking on with our day jobs, KP in the kitchen continuing to exchange crummy old tiles for wood panelling, and me being a bit of a domestic.  Not being able to put it off any longer, I got shed loads of washing done and hung out, changed the beds, cleaned the bathrooms, swept the floors and beat the rugs.  In between all this, a passata was made to throw on a pizza for an easy supper later.

Rush, rush, rush but eventually a down tools at 1pm and out the door by 1.30pm.  We zoomed round the autostrada (forfeiting the tolls for once) and were at Teramo within an hour.
We picked our spot just before the finish and there I stayed for almost 3 hours jealously and fiercly guarding my vantage point.  KP wandered off every now and then to keep me fed, watered and supplied with souvenirs, but no way, no how, was I going to move.
But it was great and well worth it.  Teramo and il Giro put on a great show.  We were kept entertained by live radio, dancing girls and boys and famous retired cyclists.  No idea who they were but from the way they were flocked around by cameras and journos when they arrived, I'm guessing they were Italian racing heroes.  The whole atmosphere was electric, a real party scene.
From my vantage point, and with the help of my binos, I was able to keep up with the race as it whooshed along the Adriatic and ever closer.  No, I didn't have super-powerful, state of the art, binos that could see all that way, but they did give me a great view of the TV screens in the corporate tents opposite.
And what an exciting race it was!  Fast, furious and flat.  Relying on Facebook updates for a running commentary and my binos firmly fixed in the corporate tents I was able to keep up to date.  Until 5km from the finish, and then it went crazy.  It was all happening so fast! 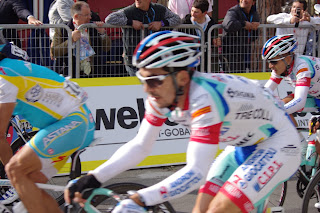 I knew Cav would be tucked away in there somewhere waiting to make his characteristic awesome sprint for the finish, but I had no idea where he was!  So frustrating!
Just slow down all of you!  Or at least spread out a bit!  When they whooshed past it was one big, exciting, blur of chaos and colour.
So fast!  I hadn't got a clue who'd won, didn't see Cav, but it was absolutely brilliant!  To have the whole lead group race past in one big powering bunch, a single almighty entity, was just amazing.  The force, the wind and the energy created was awesome.  Just think what you could do if you could harness that!  Fly to the moon and back on pedal power alone.
Eventually it came clear that Cav had indeed won! We pushed our way through the crowds and found our way to the podium with the help of KP practicing his best Italian!  Dov'è Cavendish? Where is Cavendish?  And we were pointed and pushed in the right direction in time to watch him shake, cork and spray the champagne.  Just wow! 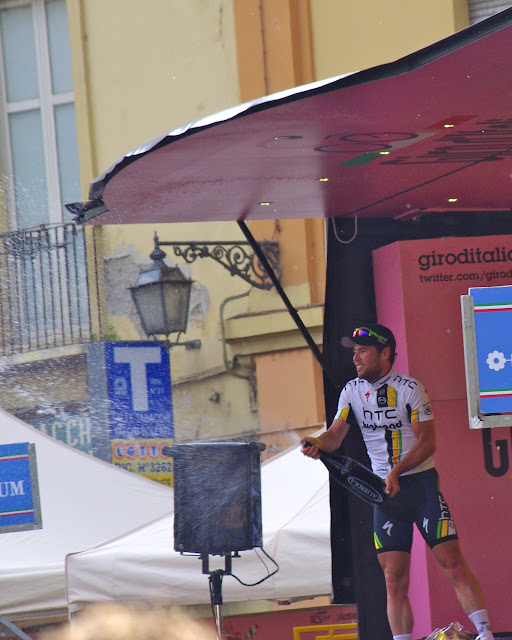 More Dov'è Cavendishes and we found ourselves waiting behind the drug testing vans. He came out, signed my card and stopped for a photo.  I almost swooned.  Cavendish groupie and unashamed!
Eventually KP dragged me away and we fought our way back through the crowds to make our way home, stumbling across an official Giro d'Italia merchandise van on his way home too . So of course we stopped him, accosted him, slipped him a tenner each and both came away with a goody bag of branded Giro d'Italia tee shirt, cap, loyalty bands, bags and clicky things.
I grinned all the way home.
Posted by Kokopelli Camping at 10:19