Our plan for taking the bikes out on a long endurance ride this morning was put on hold by the clouds building over the mountains and the brief shower we'd just had.   Change of direction. Let's go off piste exploring, but by design this time rather than accident!


You see there's a gorge that follows the river that looks as though it should go all the way to Passo Lanciano, or Pretoro at the very least.  It needs exploring and a route through being found.  Just because it's there. 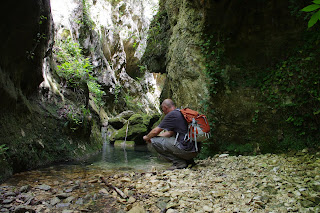 But could we find a route through?  Not a chance.  At least not without ropes and proper emergency equipment, we didn't even have a phone signal.  Climbing through the gorge was brilliant, and the sights absolutely magical the further and deeper we went.
An African rainforest abundant with exquisite ferns, vines, tropical plants and dappled sunlight.  The rock faces, boulders and cascading water completed the scene.   A Garden of Eden.
One day we'll find a route, but not today.  The climb became too steep, and the moss and lichen covered rocks and boulders were too slippery, too loose and too crumbly to climb unprotected. 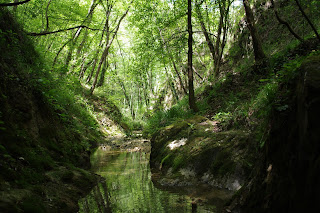 So we back tracked and tried another route over the hill.
Following cinghiale trails, we got lost many times as the trails got more and more dense and became passable only to these wild woodland pigs with their thick hides and short legs, our longer legs (even mine) and soft skin didn't stand a chance against this undergrowth. 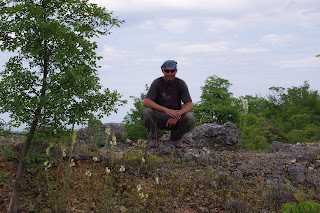 Eventually we did find our way over and through and got back home with enough time to spare to get to the sports field to watch the second half of the Serramonacesca United play off.
Under pressure this time, the standard of play was far better and, at times, quite impressive. But not enough to save them the match.  Shame really, they fought hard.
A quickie in the bar turned into a few more than expected as we picked up and practiced more Italian.  Eventually I dragged KP away and home to a very welcome supper and an even more welcome catch up with my girls.
Posted by Kokopelli Camping at 07:04