Sun 1 May - No Way to Treat Your Best Friend 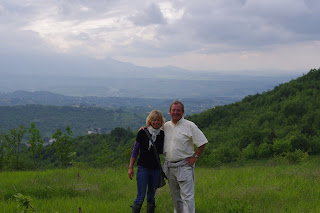 After settling Phil in at home and having a long drawn out lunch (outside, in the much improved weather), I suggested going for a shor t walk around our little hamlet to walk off lunch and show Phil the charming delights of Garifoli. We wouldn't go beyond the village boundaries, and would keep to the tarmac paths of course.  With Phil's desert best and soft leather loafers, how could we do otherwise?

Posted by Kokopelli Camping at 10:12