Mon 9 May - Worms, Police & A Kitchen With Mange

What is it with this weather?!  How can it change so fast?!  For the last three days we've had glorious sunshine and temperatures of 35 degrees, today it poured, it hailed, it stormed.  The thunder and lightening shook the windows in their frames (and me in my boots) and never got above 9 degrees.  A day for working indoors.
The first job of the very wet day was for KP to make a trip into Scafa for some woodworm treatment fluid for my 'in the process of being restored' trunk. 'Tarlo' is the Italian for woodworm we discovered before he left.  So, armed with this new word, off he went.  But it didn't help him one jot.  He ended up with the whole store in absolute fits, one poor girl helpless with laughter, at his crude diagrams of worms (complete with eyes) coming out of holes.  He even pretended to be a worm himself and eat a plank of wood.  "You eat worms?" she said.

Success was eventually achieved and KP made his way home with his prized tin of Anti-Tarlo.  And was promptly pulled by the police. 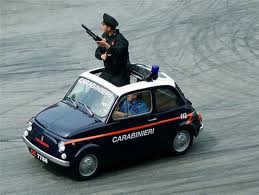 This time he was, for once, not doing anything wrong.  Just on the phone in a lay-by.  A dodgy looking geezer at the best of times he'd obviously caught their attention.  They checked his licence, did a search on the number plate and a search of the boot.  The boot that was full of ropes and climbing gear, very suspicious  to the uninitiated.  Once the explanation was made and understood the polizia clearly changed their view of this dodgy geezer, they laughed, shook his hand, patted him on the back, pulled out a packet of fags and all shared a cigarette by the roadside.  Weird.
Eventually he arrived home, and continued to cause chaos here.   Brief discussions we'd had recently about how to disguise the tiles in the kitchen without major disruption, suddenly became a reality.  With major disruption.  The kitchen is (or was) fine.  It just didn't look very nice.  It worked, it was functional and, for now (with so much else to do), we'll just have to live with it.  Or so I thought.  But that wasn't taking into account a rainy day and a bored KP.
I disappeared to return to the painting of bedroom #2 leaving KP to contemplate removing the tiles and replacing with T&G.  Fatal error.  Chaos.  Utter chaos.  The first wall of tiles just fell off.  No hassle, no bother, no mess.  The second wall, not quite so.  Oh God.  The bangs and crashes echoing round the house alerted me in my neat little bedroom of order and painting efficiency that things were maybe not going quite to plan.
Yep, there was chaos.  The wall looked like a bricks and mortar fox with mange.  Bits of tile here, concrete there, chipped marble stairs.  Bang, bang, bang, pieces of shattered tile flying around the room like shrapnel from a machine gun.  Ho hum, says I and disappeared back upstairs leaving behind the little caveat of neatness and order to be resumed by tea time.
Hmmmm.....
Actually, he did, amazingly, do a pretty good job of clearing away.  I may have a kitchen with mange, but it's a neat and tidy one.

Posted by Kokopelli Camping at 16:18