Serramonacesca: The Abbey of San Liberatore a Majella

The Abbazia di San Liberatore a Maiella
The San Liberatore was once one of southern Italy’s most famous Abbeys, and there are many legends and tales surrounding its conception.  It is said that in 781AD Charlemagne celebrated his army’s victory over the Longobards by building a church, dedicated to Christ the Liberator, on the spot where so many had fallen.
Another legend puts the origins of the Abbey even earlier to the mid 500’s, following a generous donation from two rich and most illustrious senators, Equitius and Terullus.  The donation was given personally to St Benedict when their sons were committed to his care in the Monastery of Subiaco, aged only 12 years old, so that they might be formed to perfect virtue from childhood.
It is in 884, however, that the first sure document appears giving evidence of the existence of the Abbey, by being listed as part of the possessions of Montecassino.  Just over a century later, the Abbey had become a vast, flourishing reality thanks to many donations and privileges. 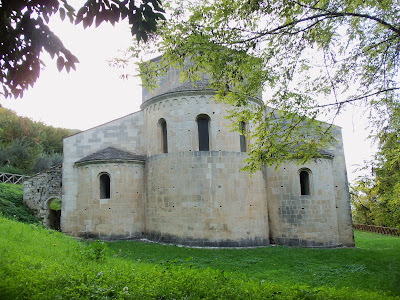 Disastrously, and shortly afterwards, the monastic buildings and the church were destroyed and turned to rubble by a ruinous earthquake.  It took the period of the Renaissance, and the provost of San Liberatore, Teobaldo, to start the rebuilding works in 1007.  A large group of workers were gathered from Montecassino, the complex was rebuilt, the belfry erected and the church extended with the addition of countless alters and precious furnishings.  A complete Benedictine monastery in Abruzzo was created. 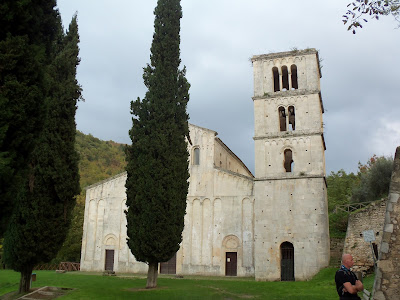 At the height of its history, the San Liberatore was Abruzzo’s most important monastic centre of art, culture and civilisation.  It was a citadel with its own workshops, plants, potteries, brickworks, oil presses, ovens and mills - one of the first water mills in Europe.  Such was the importance of the Abbey at this time, giving not only work and security to the religious community, but also to all those living in the neighbourhood.
There were guest quarters and a hospital installed, a lecture theatre and a library.  Add to that the portico and prior’s residence, the huge rectangular windows, the alters, wooden choirs, mosaic floors and sacred paintings and you have an idea of the splendour of the Abbey at this time.  There were also residential wings, a granary, refectory, kitchens and even an ice cellar.
Sadly, with the suppression of religious orders in 1806, the monks were forced to leave the Abbey and decline was inevitable.  Over the years, aided by landslides, earthquakes and neglect, by the mid-1800’s the Abbey’s dereliction was complete.  The roof was dismantled and sold, part of the high alter was taken to nearby Buccianico, the bells went to Chieti and later disappeared.  The Church of Santa Maria Assunta in Serramonacesca, however, recovered many of the furnishings and monumental parts, including the mosaic floor, the alters and the portal.
It wasn’t until the 1960’s that restoration and recovery finally began.  A splendid effort it has been, and what a glorious Abbey it is, but what we have now is merely a fraction of its former glory. 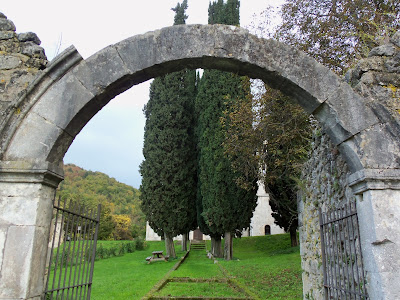 Tombe Rupestri - The Rock Tombes
From the Abbey, at the bottom of the path that leads to the Alento ravines, there are niches and grottoes within the wall of the rock that were probably the graves and hermit cells for the first monks who came to the area from the IIIX-IX centuries.
There is evidence of a small chapel, a niche for housing a holy image and a small tank for collecting water and acting as a pond.  Furthermore, in a small, inner cavity, there are shadowy fresco traces.

Although information on the tombs is scant, all the evidence suggest they were indeed places of worship, perhaps dedicated to water divinities, before being reutilised by the early monks.
Posted by Kokopelli Camping at 15:08